Vineet Bhatia arrived in London way back in 1993 with little more than a suitcase full of books, a lofty ambition, his love of Indian cuisine and a passion for cooking. Fast-forward a few years and Vineet is now a globally renowned chef and seen as the face of progressive modern Indian cuisine having published successful cookery books, recorded multiple TV series, opened several restaurants across the globe and is the first Indian chef-patron to be have been awarded a Michelin star.

When he is not cooking at one of his many restaurants or shooting for TV, he is setting records and creating experiences of a culinary kind. Most memorable was the trek up to the Everest Base Camp in June 2018 to set up a ‘pop-up restaurant’ for ten lucky diners that flew in via helicopter. In December 2019 he prepared a gourmet Indian meal each day on board the French cruise liner Ponant along with Chef Alain Ducasse’s team, for the ten day sail to Antarctica.

“Bhatia has lifted the cooking into a new league; providing convincing proof that Indian food is capable of evolving.”

“Despite all the advances made in Indian food, I think Vineet is still the finest modern –Indian chef anywhere. His ability to make complex flavours clear and harmonious, while keeping dishes light and fresh, is unmatched, and his seasoning is always pitch -perfect.”

“Each of the small, carefully crafted dishes are as refined as the setting, fusing complex flavour combinations that will tease your taste buds to try more. […] Bhatia’s menu is modern, refreshing and unlike any Indian food I’ve tasted before, so expect the unexpected.”

“Dishes are deliciously nuanced and ideas bountiful; it is like being in the Indian version of Charlie and the Chocolate Factory. Bhatia is a true food inventor.”

“This is cooking that is quite unlike anything else you will find in London, delivering combinations of originality and complexity that keep the senses alert rather than overwhelmed.” 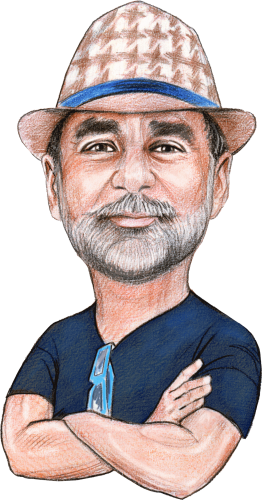 Vineet has been featured in numerous television series both in the UK and internationally. Most recently he was the judge in Masterchef India and Netflix series – The Final Table. He has also appeared on the Fox Traveller series – Twist of Taste with Vineet Bhatia and the likes of Peschardt’s People BBC,  Market Place Kitchen, UK Gold’s Good Food Live, India’s B4U, Carlton Food Network, Channel East’s Café East, BBC2’s Slice of Life and The Restaurant Show with Bruce Bruges.

Vineet Bhatia around the globe

Through his unique and progressive approach, Vineet established himself as the father of modern Indian cuisine, making him synonymous with elite fine dining, a reputation reflected by his portfolio of exclusive international consultancies. Vineet has realised his childhood dream of being involved in flying through Chef consultancies with Qatar Airways and British Airways. Simply zoom in on a moustache to find out more about each of Vineet’s award winning restaurants.